You are here: Home / Archives for REI

For our fifth anniversary, my wife and I bought each other1 Victorinox (Swiss Army) Garrison Elegance watches, or as they’re generally known, the $125 REI Swiss Army watch. The Men’s watch features a 1.25″ face, and the women’s a 1″ face2. The movement is quartz, but it’s made in Switzerland. From what I’ve heard, REI and Victorinox worked together to design a watch with this build quality, and price point. Given the cost to my wife’s shop, REI can’t be making a very big profit on these watches (neither could Victorinox for that matter).

The back is screw on, which leads to a tighter water seal, but the crown (the nob that you use to adjust the date/time) is not screw down, so the claim of 100m (330ft) is probably not realistic. The band is a silicon rubber, and the biggest problem with it is sweat. In the sun, my arm tends to sweat a bit, and causes the watch to be a bit gross. I might try out the nylon band option at some point, see how that fares, but nylon is going to tend to snag more. The hands, and dots above each number glow in the dark, and overall, the glow is not obnoxious.

The real advantage to this watch is that as the name implies, it serves very well as a casual every day watch, as well as a dressier watch. No, it’s no Rolex, but at 1/20th the price of the lowest cost Rolex’s, it’s certainly more affordable3. Another awesome “feature” is the affordability of parts. The crystal (quartz as well) is only $10 to replace. The band is about $10, and the whole movement is only $25 (obviously none of this includes labor). This watch should certainly last me 10+ years assuming I don’t lose it in a lake.

It’s been 10+ years since I’ve regularly worn a watch, and this one certainly doesn’t make me feel like I’m wearing a bulbous weight on my arm.

Both watches have performed very well, and I would gladly buy them again. If you’re looking for an inexpensive, analog, dress/everyday watch, this might be a good one to consider. I only wish that REI stocked them more reliably (they almost always have the women’s, but not the men’s). 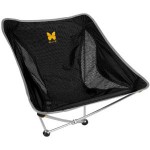 Since I’ve been spending a lot of time playing console games, I’ve had an ongoing issue with a lack of good seating in the room my consoles live in (the guest room). There’s the guest bed, but it’s uncomfortable to sit in for long periods.

I’ve looked at gaming chairs, but they all suffer from complaints about them being built for kids/teens, or uncomfortable, etc. Then my wife mentioned a camping chair that a friend had purchased. The Monarch Chair by Alite. While a bit spendy, I did have an REI gift card, and the gaming chairs I was looking at were all at least $70. A quick drop by REI, and I came home with the chair. Basically, it’s like an L shaped hammock that uses sturdy tent pole type framing to hold it together. It’s really meant for camping/backpacking, but the comfort wonderful. And if you put it right infront of our guest bed, you can basically lean back into it. You also get the same basic rocking action that gaming chairs have.

While I haven’t done any marathon sessions in it, I can say it is MUCH better than sitting on the bed, and may even rival the comfort of my Aeron at work. I will post back after I give it a good 4+ hour session, but in initial testing, it’s very comfortable. Plus, I can take it camping/backpacking. =) Alite may have a whole new market on their hands. =D

As a late gift to myself for Christmas1, I bought myself a clearance pedometer from REI just before the end of the year. It arrived the friday before new year, and since then I’ve been using it extensively (6 days now, woo). I can say, it works. It’s pretty no-frills, but you can pretty much wear it anywhere (I have it in my jeans coin-pocket), and it seems to keep good track. It auto resets at midnight, but keeps the previous 7 days of logs.

And, being the stats junky I am, I have created a DB table, and a simple form for me to input my daily distances. I hope to keep up on this, but we shall see. You can see that info next to my energy usage, and Prius mileage.

All and all, it’s a good product. I probably wouldn’t have paid the retail $50 (actually, definitely wouldn’t have), but for $18, it’s a great deal for a pretty solid pedometer.