You are here: Home / Archives for Home Ownership

I’ve been building a smart home (at my home) for years. Buying home automation, energy monitors, etc. One of the big things I had no good way to monitor was water usage. So when I found out about FLUID Water Meter (years ago), I was stoked. I missed the Kickstarter (somehow) so I put my name on the waiting list and waited.

Then, come January of this year, I got an email from Fluid saying they were accepting pre-orders for a run of meters they’d do and have delivered by end of April (2019). Cool. Also, that the price would be $300 vs their expected MSRP of $600. I sent an email to them confirming the meter would work on my home piping, and then placed the order. Something I should have never done (in hindsight).

As time ticked I kept checking Fluid’s website. No updates. The only email I got was a confirmation of my preorder. No status updates on the process of their April run. April came around and I started trying to contact them asking for an update. Nothing. Finally, something I should have done, I looked at the comments on their Kickstarter page and saw a lot of asking for refunds, and a lot of non-responses. =/ Also the fact that no one on Kickstarter had had their order fulfilled in the years since.

Then I looked at the reviews for the preorder site (Celery, or trycelery.com). Not great. Their FAQs pages were all seller focused with very little targeted toward buyers. So, I’d had enough. I contacted Fluid through Celery asking for a refund. Nothing. I tried contacting Celery asking for options if the seller doesn’t respond. Nothing. Tried contacting Fluid via twitter, facebook, other email… nothing. Finally, I did the last resort and filed a chargeback with my VISA processor (in hind sight, I should have used Paypal). I have more than a sneaking suspicion that VISA won’t be able to help me, but I’m hopeful.

At this point, I’m hoping I get my money back and then I’ll save up extra and buy the Flo from Moen. Sure, it requires actual plumbing, but it looks like a better product, and I don’t worry that Moen is going to randomly up and close shop.

A Couple weeks ago, we had new Milgard windows installed on our house. The windows that were in the house were standard, 1978, double glazed, aluminum windows. They weren’t terrible, but they weren’t great either. A couple had popped seals (moisture inside), and they would grow mold on the frames from condensation. While we fully realize that window upgrades RARELY pay for themselves in terms of energy savings, we did hate the mold and look of the other windows (plus the fact some had blown seals), we did go ahead and make the purchase1.

While the install took all day, the result after the fact has been great. The windows LOOK much better, and I’m fairly certain my allergies have been better (mold removal is always good). For my own interest sake, I’ve compiled info on the windows that you can  (if you care to) see here (PDF download). Information is mainly for my sake, and includes model of the window, size, features, and most importantly U-Value (inverse of R-value), SHGC (Solar Heat Gain Coefficient), and VT (Visual Transmittance) info.

Otherwise, this post is pretty much at an end (for now). 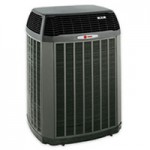 Last week, I had my yearly service performed on my heat pump system. They come out and clean the coils, and check everything to make sure it’s working. This year, though, the tech said there was something questionable, in that the subcool was too high, and that there seemed to be too big a temperature change on each side of the liquid line filter drier (LLFD). So, they suggested a service tech come out, and take a look. Fine, though I wasn’t looking forward to the cost.

Knowing resources are out there, I posted on the hvac-talk forums here, and got some opinions before the tech came out. Alas, the useful bit I didn’t get until after the tech came out. The key bit being: you can’t accurately measure subcool and superheat when the heat pump is in heating mode. So if your maintenance people tell you the subheat or subcool are off, and it’s 40°F out, and your house is being heated, you can PROBABLY ignore them. Obviously if they’re WAY off, it could mean something, but by and large, they’re only relavant in cooling mode. That is all. =)