You are here: Home / Archives for 10Mhz 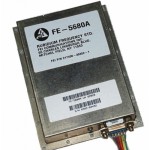 A seller on eBay recently listed some FE-5680A Rubidium Oscillators for $30 + $10 shipping for parts repair, and I couldn’t pass up the chance to pick one up, especially when there’s so much info out there, and the wonderful FAQ here.

The unit arrived in the mail after two weeks, so I set about wiring it up. Since I only have a single output bench PSU, I had to wire up a simple 5V regulator (just an LM7805CV with heatsink) to supply the 5V logic power needed for the unit1 and fed that with my PSU supplying 15V 2A to the whole circuit2.

On first power up (on the messy breadboard), the unit warmed up, and BRIEFLY locked (pin 3 went low), then quickly fell out of lock, and dashed my hopes it would work out of the box (on the plus side, I got to do a repair!). The repair, of sorts, generally involves adjusting a trim-cap in the unit to make sure the PLL sweeps through 10Mhz. You can check if this is the issue by looking at the output (Pin 7) on a counter, and seeing if it goes above/below 10Mhz on its sweep. In my case, it did not, and went from about 9.99970Mhz to 9.99998Mhz, then back down (about a 280Khz sweep). The fix is to remove the top cover (more on that in a sec), move some foam aside, and adjust C2173.

END_OF_DOCUMENT_TOKEN_TO_BE_REPLACED

While I don’t do a lot of RF electronics work, the idea of having a lab standard frequency has appealed to me for some time. Initially, I was drawn to a Rubidium (Rb) standard, which can be had off eBay for $100-$150 or so, but these units are used, and the life left in the lamp is obviously unknown. A Rb standard is accurate to about 1*10-11, or about one millihertz when they’re set to 10Mhz. Not too bad. A GPS oscillator, assuming well designed, should be about an order of magnitude greater, or 1*10-121. Plus, a GPS oscillator shouldn’t really “age” like a Rb, so there should be no need to replace the unit after so many hours of running. Further, Rb standards run hot, and use a fair amount of power (I believe about 10W). But, they “lock” within about 2 minutes of powering on. GPS standards are generally going to take a bit longer than that to lock, if powered on cold (15 minutes or so from my readings), and obviously they also require vision of the sky, but, power consumption should be on the older of 500mW-1W when running, so my inclination would be to let the unit run 24/7, and as a bonus, use it as a time source for NTP.

All this said, I’ve been keeping an eye out for one of the venerable Jupiter 12 units on eBay, and while a couple miniature ones came up a few months back, I missed out on them, and wasn’t REALLY interested because they used a very small .5mm header. Then just a couple weeks ago, two of the larger units came for sale via the same seller for $50 each. I purchased one, and started looking into creating the Phase-Lock Loop (PLL) needed to lock a 10Mhz OCXO to the 10Khz signal generated by the GPS unit. Also, had to order an antenna, and pigtail for that antenna (I decided to buy an MCX to SMA pigtail because that’s what’s used in the project I’m attempting to imitate). The PLL circuit I went with is the one created by JRMiller that I do believe is derivative, but the board looked good, and the parts weren’t too expensive. Plus, he had all the part numbers for ordering them off Newark/Farnell, which meant I was able to order the PLL board from him, and all the necessary parts in about 10 minutes time. Score!