You are here: Home / Archives for Soldering 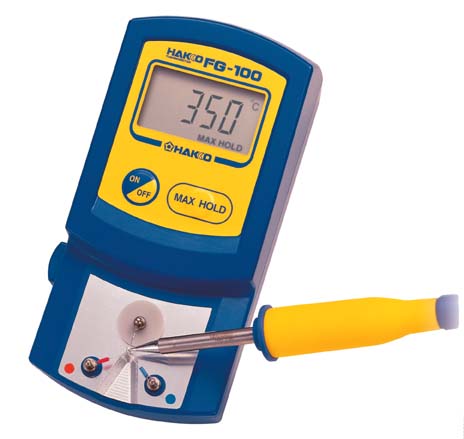 I recently had my Hakko FR-300 repaired due to a bad heating element, and while I was looking at doing it myself, they mentioned calibration after replacing the element. So, I started looking for how much a soldering tip calibrator would cost (since many thermal probes won’t measure that high). Turned out, there are a ton of fake/grey market Hakko calibrators on eBay for less than $15 shipped from China1. Anyway, I bought one, and waited.

The unit arrived a couple weeks later2, and I must say, it is the most amazing fake I’ve ever seen. The box looked legit (included serial number), the packaging inside looked legit, and the unit itself looks identical to the real thing. The biggest take away is the “Made in Japan” on the back of the unit… which, isn’t very believable. I don’t want to take it apart to look at the soldering (since there’s some spring mechanism involved), but I’d imagine it’s scary. Anyway, the unit is extremely easy to use. You throw a sensor on it (mine came with 10), and then fire up an iron, wet the tip with solder, and place the tip on the sensor “middle”. My recently repaired/calibrated FR-300 read 401C when set to 400C. Cool (the unit claims accuracy of ±3C, and the FR-300 was calibrated to ±10F (approx. ±5C)). So then I tried my Hakko 936 (old and trusty)… setting to 375C resulted in only reading 320! Holy crap, my go to iron was over 50C low, no wonder reworking some joints seemed troublesome. According to the 936 manual, you’re supposed to calibrate at 400C. Turned to that, it remained over 50C off. Luckily, calibration is easy (small phillips screw trimpot under the main knob), and relatively quickly I had it registering correctly.

Final test was my Weller WTCPT tip controlled unit. It SHOULD always be maintain an accurate temperature. I fired it up with a 700F tip installed, and after a couple minutes, checked, and it showed 376C, or 708.8F, which is within spec since the tips are ±9F rated. It did cycle a bit on and off, but well within ±15F, which is fine with me.

While I wish I couple buy a real (or at least legit) Hakko FG-100, I don’t see myself calibrating my irons regularly and only have the two that can be calibrated anyway. =) For less than $15, I’d HIGHLY recommend one. Especially if you don’t know how accurate your iron is.

Ever since I first saw the MintyBoost, I wanted to build one. It was a very simple design, used AA’s rather than a 9V (on account of higher mili-amp hours), and all this fit in a tiny Altoids gum tin.

So, for Christmas, I bought a kit from Thinkgeek.com and put it together. Total soldering time was about 10-15 minutes. The instructions were a bit difficult to find online (the kit only comes in a static bag, with a URL to the site), but they were well done, and had the thing together very quickly. The harder part was finding the Altoids tin I had set aside for this project years ago. =)

All together, the unit works great, and fit in the tin very well (though, it did take some creativity to deal with the long leads coming off the battery holder). It properly reports it’s output capability to my iPhone, and charges quite well. I haven’t hooked up any system to monitor actual drawn amperage, but I hope to do that soon (and will report back).

All and all, very happy with the device, and it now has a permanent spot in my EDC bag, incase my battery in my phone, or any other device, dies. =)