You are here: Home / Archives for Global Specialties 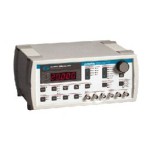 I recently picked up a Global Specialties PW-2120 Sweep/Function Generator at a local electronics shop for $30. They had it in back as broken, but didn’t have the time to repair. At the time they only mentioned that the knob was broken (it was, the whole PCB had “popped” off the back of the rotary encoder. But, some prodigious application of hot glue fixed that). The bigger issue is while the buttons and everything worked, there was zero output. Changing to any frequency, sweep, or wave shape resulted in nothing on the outputs. More interestingly, the frequency counter function worked perfectly. So that wasn’t it.

Getting out the FLIR, I was able to see that the CLC522 (variable gain amp), and the 5V regulator (7805) were both getting pretty warm. More interestingly, checking the resistance between the +5v and gnd, there was only 500ohms. That’s not right (or, at least, doesn’t seem right). Visual inspection showed something a bit worrying. U1 on the main board was missing. Now, it COULD be an add-on chip, but that seems unlikely for a chip labeled “U1”.

So, first thing’s first. I contacted GlobalSpecialties to ask for schematics or a technical manual. First response I got back was the general manual, which I had already found. So, emailed them back, and the next day received a nice zip file of all the schematics! Awesome!