You are here: Home / Archives for Envoy 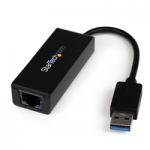 I got a Macbook Air 11″ a few months back, and honestly, I love the thing. But one item does bug me… the lack of a network jack (wires are just faster than wireless still). Obviously I know why Apple didn’t include one: it would be thicker than the machine already is. Now, Apple makes a Thunderbolt to Gigabit Ethernet adapter, and a USB2 to 100mbit adapter, but the former is no use when you’re using an external display, and the latter is slow. So when I looked for a good option, the Startech USB3 Gigabit Adapter came up, and looked promising. USB3 has a theoretical limit of 5Gbits/sec (more than enough), and they have Mac drivers (obviously it would be nice if Apple had native drivers, but I’ll take what I can get).

Work ordered a few, and once I got my hands on it, I thought I’d put it through it’s paces comparing it to the Thunderbolt adapter, the Apple USB2 adapter, wireless (802.11N 5ghz), and just to test USB3 throughput, a 128GB SSD in a Other World Computing Envoy (SSD came from a 2011 Macbook Air).

Network tests were performed with iperf, with the server side running on my Mac Mini Server, with the TCP window size set to 129kbyte, and an Airport Extreme (Dual Band, MB763LL/A, Mar. 2009, Firmware 7.61) as both the wireless access point, and switch). Tests were performed five times, with the top and the bottom result thrown out, and the middle three averaged. The SSD test was done with dd1.

So, what does that really tell us? One, the thunderbolt gigabit adapter is the fastest option (which makes sense since thunderbolt is basically a PCIe interface, and very little overhead. And two, the USB3 gigabit interface is pretty quick. It’s a bit slower (about 5%) than the Thunderbolt option, but still WAY faster than Apple’s 100mbit option (~9x), and wireless (~6x) for that matter. The SSD test proved that it’s not a USB3 limitation that’s capping the gigabit adapter at less than gigabit speeds (could be the Startech drivers, or the AX88179 chipset itself). All and all, I’m not complaining. The package is small, lightweight, and it has link lights (something Apple has never been fond of, despite their extreme usefulness).

If you’ve got a Macbook Air, or a Macbook Retina, or hell, a PC laptop without a Gigabit ethernet port, but with USB3, get one. They’re only ~$35 on Amazon.

I ended up inheriting an unwanted/unused 128GB SSD from a Macbook Air, that just sat on my shelf for a year before I decided there had to be something to do with it. A quick search on OWC found the seemingly perfect Envoy enclosure. You just drop in an SSD, and you have a USB3 capable external drive that’s damn fast. Even better, they had one that was open box, and 15% off. Sweet! Ordered and waited.

The enclosure arrived and I quickly installed the SSD. This was pretty painless, but it did seem a bit odd as there was no mechanism to keep the SSD in place… the casing just, basically, sandwiches it. Seems like it would have been preferable to have a some type of set screw, or something to hold things in case of shock… but maybe given how light the SSD is, the chances of it actually pulling free of the connector are minimal. Also a bit annoying is they didn’t provide the torx screwdriver needed to put it together. Thankfully, I had several and it didn’t slow me down.

Once it’s screwed together, they provide some nice rubber feet to place on the bottom that cover the screws, which means taking it apart later would mean pulling those off, but that’n not a huge deal. The drive did come with a nice faux-velvet pouch to keep it in too. Nice!

Plugging it into my new Macbook Air resulted in a pretty quick format, and some fairly impressive speed tests. Uncached sequential reads/writes hovered around the 150MB/sec mark in both 4K and 256K block sizes. Random reads/writes were a bit slower with 4K reads/writes being about 20MB/sec, and 256K reads/writes about 120MB/sec. Which still blows the pants off rotational media. Though all of these are less than I would think an SSD over USB3 would be.

A quick search online turned up that with that generation of the Macbook Air, Apple used either Toshiba or Samsung drives. Where the Samsung’s performed well all over, the Toshiba’s were noticeably slower. But, given the drive was free, I’m not going to complain.

Am I happy? Absolutely. I’d highly recommend this rather inexpensive enclosure, which fits easily in my bag, to anyone with a space MBA SSD lying around. A warning, though, that apparently there are a couple different Envoy models depending on what generation MBA SSD you have. So shop carefully.