You are here: Home / Archives for Compost 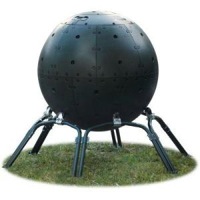 The box consisted of 16 panels, about 200 rivets, several dozen linking pieces, and random other stuff. All told, it took me about 2 hours to put together. While it wasn’t hard, it is a bit time consuming, and really bugs the hand (putting the rivets in is really hard on the thumbs). I got the the point when joining the two halves together that I was just using a hammer to pound the rivets in rather than pushing it in.

You’ll need a hammer, 8oz is what I used (also a rubber mallet is highly suggested), a phillips screwdriver (electric if you have it, mainly for the base), and if you have them, a couple metric sockets (I think a 8mm and 10mm, if I recall… also for the base). And for the love of god, have a thimble, or a padded glove… just to protect your thumbs.

The base actually took a while to put together all in itself, but if you have an electric screwdriver (like the PS20) I’d highly recommend using it. It’s a lot of screws (36 to hold the legs together, and another 24 for the rollers, so 60 in total).

I got it situated in the yard after finishing building it, and it does indeed look like a tiny Death Star. Right now, with not much in it (some yard debris, coffee grounds, and a few other things), it’s pretty easy to turn, but reviews online seem to indicate once it’s near full it becomes almost impossible to turn. So, we’ll have to see. Also, I have no idea how long it’ll take to make compost, or how the compost will turn out. So, I’ll revisit this review once I have something to report.

At the very least, it’s the coolest composter you’ll ever see. How it performs will more than likely impact that score. Will come back in the next few months and report.