You are here: Home / Archives for Capacitors

Late last night, my router went down. Checking it, I saw that the lights were all off. Huh. So, I unplugged and replugged it, and it came back up. Figuring it was a glitch, I went back to bed, and thought nothing of it. This morning, I found it was off again, and re-plugging it would do nothing. Crap.

So, I pulled it off the wall, and opened it up. Hey look, a bad capacitor. It’s labeled as a 680uF 16V cap, with a nice bulged top. After finding a replacement in my capacitor stash, I went about removing the old one… which was, a pain. Mainly because it’s on a huge ground plane, so heating the leads enough to get it removed was a challenge. Even my FR-300 desoldering gun took a bit of work to get things hot enough to melt. But, after about 5 minutes of working on it, I got the old one out, and the new one in. The new one is a bit taller, but it does fit12.

END_OF_DOCUMENT_TOKEN_TO_BE_REPLACED

My dad handed me another item to repair this weekend, a Roland GP-100 Guitar Processor, circa mid-1990’s. He reported that it had been acting strangely, so he replaced the backup battery in the unit, but after that, it wouldn’t boot (screen would light, but then it wouldn’t show anything, or respond to controls). To me, symptoms like this always scream power supply problems, and given the age of the unit, to me that meant capacitors. So I agreed to repair it, and brought it home. After confirming the problem myself (you never know how someone’s AC power can influence issues like this), I started looking quickly for the service manual, which I found quickly at this wonderful site! And quickly found the schematic for the power section of the board. Holy crap, I quite literally explained, they put 25V capacitors on the 21V rails. That’s a pretty small margin, and bound to lead to excessive heating1, and while the ones on the 7V rail are at least better (15V), it’s still a bit closer than one likes to see2. Throw in there’s no ventilation for the enclosure, and these things are bound to be bad… let’s take a look.

END_OF_DOCUMENT_TOKEN_TO_BE_REPLACED 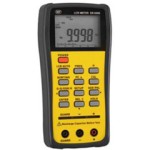 I previously purchased an ESR meter kit a while back for checking capacitors on things like LCD monitors, power supplies, etc. And it has served me very well, but unfortunately, I needed something that would measure inductance. And while you CAN do it with a function generator and oscilloscope, it’s just a pain to break out the pieces needed, power things up, etc. I wanted a simple meter for checking inductors/chokes (partially because I have a huge pile of unmarked inductors I got from a very kind neighbor), since older/larger ones usually aren’t marked at all. The one that most people point to for hobby/intermediate use is the DER DE-5000, which is found from various resellers on eBay, and is the OEM part for the IET DE-5000 (IET just calibrate it a bit better, and offer proof of calibration). After some looking, and time, I found an eBay seller selling the DER DE-5000 with the alligator clips, tweezers, and ground lead for $85 with free shipping (a good $40 less than anyone else) (which I’ve told people on the eevblog forums about this sale, and probably given the seller a good 10-15 sales).