You are here: Home / Archives for Energy 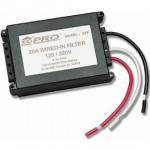 I’ve talked a bit about this subject before, but with a new experience under the belt, I thought I might add to the collective knowledge out there.

I recently (week or two ago) installed a 12V track light system that obviously uses a transformer (in this case, electric) to step down the standard 110V household current to 12V. It’s not on the same circuit as my TED, or even the same phase, but immediately when turning on the lights, my TED signal drops to 0. It must be that this transformer is putting out so much noise on the system, that it’s going all the way to the transformer at the street, and then back along the second phase. Really, no idea.

Anyway, after discovering I couldn’t move it to a different phase, I started looking at filtering options to remove all the noise it was causing on my power system. At first I thought I would just filter the offending light, and looked at X10 XPNR‘s which seem like they’re added to the offending device, and remove the noise. But THEN, I stumbled upon this! Holy cow, an actual “official” solution. And while they have them for less than $10, shipping was almost as much as the product itself. So, I went back to my trusty supplier, and got one here, for a total of $16 with shipping. When it arrived late last week, I was a bit surprised by it’s size. Yes, it says how big it is, but you don’t quite get that until you have it. It’s pretty darn big. But, using the directions posted on the TED site, I was able to wire it in (using pigtails for the red and white wires, since all three wires were far too short), and fit it in my breaker box. And afterward? TED works like a charm. I’d imagine my actual signal reliability will be higher with the filter since everything else in the house is no longer causing dropouts. The only other thing I could do would be to create a REALLY dedicated circuit for the whole TED, but that just seems excessive. Maybe if I upgrade to a 5000 I can put it all on it’s own circuit.

I’m approaching another year with the TED, so I’ll be posting back for the new year with new numbers comparing to last year, analyzing this year, etc. Stay tuned!

This last weekend I purchased two black food grade 55gal barrels from a local rain barrel maker. Black isn’t a color he normally has, and we figured they might hide a bit better on the side of the house. They used to contain 55gals of “Nutrisound 75”, made by Agrarian Marketing Corp. I’m hoping to get some more info from them about the product, but it looks like it’s a nutritional supplement for livestock. Judging by the smell, I’d say it’s got Vitamin B in it. I can’t see what it has currently since the label has faded pretty seriously.

Over the next few weeks, I’m going to kit them out with a faucet, link them together, and figure out some type of rain diverter for getting water into the barrel. I hope to create a bit of an evolving post for this so I can detail my work on the project, what works, etc. There’s a lot of info out there about making rain barrels, but there doesn’t seem to be a lot of people saying “this is what I did, and while it works, this would work better”.

First work will be this weekend. At least cleaning them out and maybe drilling holes for the faucet, etc. We’ll see.

My wife and I went shopping at the local hardware store for something completely random, and instead bought a pre-lit 6.5′ christmas tree. Normally $170, marked down to… wait for it… $10! Sold. Anyway, it came pre-lit with 300 mini incandescent lights. There was no option for an unlit tree at that cost, so we figured we’d just “unlight” it, and relight it. But before that, I thought I’d use my handy Kill-a-Watt (Thinkgeek right now is the cheapest place to get one, otherwise I’ve bought two of them from here) and see how much power 300 mini lights use.