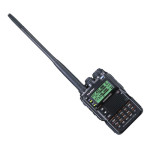 As I mentioned in my Ham post, I mentioned that I purchased a Yaesu VX-8DR. This is still one of the top of the line HTs that Yaesu makes (it’s THE top of the line for their analog HTs, from what I can tell). It’s only been surpassed by the new digital line, from what I can tell, though I don’t believe either of their digital line HTs are IPX-7 certified (water resistance, etc). I basically wanted a radio that my son could get ahold of, and drop, or dunk, and not break.

So, first off, the radio is small. It’s basically as small as you could make it and still have it “fill” a “normal” hand. I have relatively normal size hands, and if it was any smaller, it would be pretty unusable. The buttons are pretty small, as people have commented on online, but the radio would get bigger if they were any bigger. There’s a lot of inputs here. If anything, the PTT button may be a bit small, but that actually prevents hitting it overly accidentally.

When I first got the radio, I didn’t have my callsign yet, so I was pretty paranoid about keying it up, but thankfully I got the callsign the next day. So that was nice.

The unit is a bit confusing to use. There is a ton of functionality there. It receives from 500khz to 999Mhz, it transmits on 4 bands (6m, 2m, 1.25M, and 70cm)1, has dual listen (can listen on two completely separate channels at once), and has AM/FM broadcast listening. So you can, in fact, listen to a local repeater, and an AM/FM broadcast as well. I found myself last night listening to a local, very active (because it was tied into the WIN system for “Insomniac”) repeater and a local FM radio station, or listening to the very local, yet dead repeater, and talking (when I could) on the more active WIN system repeater.

One tweak I would suggest Yaesu make if they continue with this design of radio… make the “volume” button configurable. The way it is with the VX-8DR is the main nob changes frequency, or channel (depending on if you’re in VFO or Memory mode), and you have to hold the Volume button to use the knob to change volume. I would like to reverse that, so volume is changed by default, and frequency is changed when holding that button.

Otherwise, the unit is great. It sounds great, feels great, and performs quite well with the standard rubber duck (I’ve just ordered a SMA to BNC adapter from Stephen Gulyas, and then a little stubby dual band antenna (Maldol MH-209) (should be good for events, or other close quarters talking, camping/hiking, or even chatting on local repeater), and a bigger whip style antenna (Diamond RH77CA). Sure, neither will do 6M, or 1.25M, but I haven’t really used them at all on this unit… maybe when I want to branch out I’ll pick up antennas for those purposes (6M on an HT generally means a big antenna, and poor results (you need more than 5W power), and 220Mhz requires something that I can’t seem to find easily (Smiley 27000?)).

All and all, I love the unit. I’m still searching for a good “pouch” for it that I can put on my bag, and unsure when I’ll buy the speaker/mic (it’s expensive). But, should be fun, and hopefully not lead to too many more purchases (at some point I’ll probably want something that’ll do true HF, but that’ll also require a license upgrade (at least General) for me for most of the HF bands).