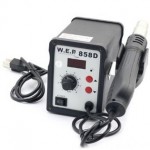 In my attempt to grow my repair gear arsenal, I recently picked up an inexpensive hot air station which gets pretty decent reviews around the web, a WEP 858D. This is the same as the Atten 858D, only it’s 110V (for us Americans) vs the Atten being 220-240V. Tenma also rebrands this unit as the 21-11425. I purchased mine though a company called Sain Smart for $52 with free shipping. Only down side, it’s from China, so it took about a week to arrive (which stuff from the US can take that long as well).

Early in the production of these units by Atten and WEP, there were some serious production issues that were highlighted on eevblog. At least one person’s was wired with the hot leg to the chassis (serious shock hazard), where a few others were just grounding issues (mainly that the unit was fully painted, so the ground connection to the chassis wasn’t making good contact), and a couple also were fused on the neutral leg. The main issue, which I also had, was the power switch was switching neutral, rather than hot. While this isn’t a MAJOR issue, it’s still not considered to be up to code, and is probably done to save a couple wire cuts, and a bit of time.

Anyway, I got my unit, checked all the grounded surfaces, opened it up and checked for stray solder, fused hot, etc. All looked pretty good, except the power switch was switching neutral. Worse, when I fully opened the unit, the power switch fell apart (see picture). Awesome. Figuring I’d give it a shot, I emailed Sain Smart and told them about the switch. Within 24 hours, I heard back that they didn’t stock the switch, but they’d be willing to pay for a replacement switch, including shipping from eBay. Knowing the eBay ones would be similarly sketchy, I asked about purchasing one from Digi-key, and they agreed. So, after some searching and measuring with my crappy calipers, I found the equivalent made by Cherry, the CH755-ND. I ordered 2 (never hurts to have a spare), and waited for them to arrive. And, I few days later, they did!

The new switch fit perfectly, and the same day I got the switch, I got the $4 credit via Paypal from Sain Smart. Awesome! Soldering in the replacement was cake. My only tip is, be quick. Switches are plastic, so if you apply heat for too long, you’ll melt things.

So, how does the unit work? Well, I haven’t done any reflow work with it yet, but I will say it kicks the pants off my hot air gun for doing simple shrink wrap work (certainly don’t have to worry about it melting the wire, or plastic around it). The unit is very quiet (relatively speaking), small, and really, just does the job. I’d highly recommend it for the $50 or so they go for if you plan to do anything with hot air. I’d enjoy being able to switch it to Fahrenheit instead of Celsius, but it really doesn’t matter that much. And I love to sleep function. I can use it at 300C, put it in the cradle, and 15 seconds later, it’s off (the system cools down to 100C before going to sleep). Pick it back up, and it’s back to 300C in no time. Better still, it remembers previous settings on power on. =)

Highly recommended if you are comfortable fixing the wiring.