You are here: Home / Archives for The Hunger Games 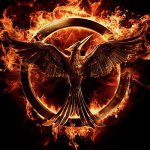 Since I have previously reviewed both of the first two movies, I feel compelled to review the third movie, even though it’s part one of two. It will be a short review, however.

The movie takes off from pretty much the same moment Catching Fire left off, and we start to see District 13, and as those that have read the book know, it quickly becomes Katniss throwing a fit that Peeta wasn’t gotten out when the dome collapsed. It’s extremely sad everytime you see Plutarch Heavensbee (Philip Seymour Hoffman). Hopefully they won’t CG him into the second part of Mockingjay.

The movie stays relatively true to the book, and even includes a nicely done monologue of information that should have been in the earlier books: Why President Snow wears and smells of Roses.

All and All, I enjoyed the movie, and don’t want to give up too much incase people haven’t seen it, or read the book.

I recently saw The Hunger Games: Catching Fire and having read the books, I can say that the movie both kept very closely to the book, as well as provided a nice improvement to the first movie, which seemed very low budget. The second movie starts very shortly after the first one ended, and picks up with very little attempt to re-introduce viewers to the characters, or the plot. Viewers are obviously expected to know what is going on before starting this movie, even though about a year and a half has passed between the first movie, and the second.

For more info on what the plot is, please see my review of the first movie here. So after the first movie/book, and our main characters survive, they go on to live in nice houses back in their district. The idea being they are being rewarded by the Capital for “winning” the games. The movie basically starts at this point, just before they are about to go on their “tour” of the country talking about how great the games were, etc. And they also get to see the riots that are breaking out in the country.

Anyway, it’s hard not to just detail the whole movie. I can say, however, that the movie follows the book very well this time around, and the production quality was very good.

Anyway, recommended, and I have very little negative to say with the movie.