You are here: Home / Archives for Soldering Iron 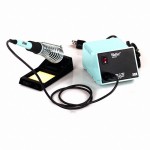 Back in January of 2006, my wife (then fiance) bought me a REAL soldering iron, after I’d been using the generic crap you see from Radio Shack for $20 (plugs directly in the wall, no temp control, measured in watts, etc). At that time, I was doing some soldering at work with a fairly decent, ancient, HAKKO 936. A great iron, but uses an analog dial to set temperature. Since everything I solder is done at about 700F, it seems a bit silly for the temp to be adjustable up to 900F.

So, after some research, I came across the Weller WTCPT. It got great reviews, and it basically lived at a constant temp (more on this later). A quick trip to a local, now defunct, electronics retailer showed they had it for $124, which was a great price. A few weeks later my wife bought it for me as a gift. And since that time, 6+ years ago, I have NEVER had a problem with it, and I just recently taught her how to solder with it.

So, what makes it so reliable? The temp control. Many nicer soldering irons, including the Hakko FX-888 we just bought at work, have a temperature control dial which you set to the temp you want to solder at. This is handy it some situations, but most of the time, it’s not needed. Most soldering I ever do is at 700F, so I don’t need to worry about the dial. The WTCPT is designed with this in mind. Basically, the tip controls the temperature. You buy a tip rated at either 600F, 700F, or 800F. On the end of that tip is a ferromagnetic end, which at any temp below it’s rating (let’s say 700F), is magnetic. When it gets to 700F, it ceases to be magnetic1. See where I’m going? The electrode in the soldering iron handle is a magnet, and heats the tip up to it’s temp, at which point the tip is no longer magnetic, so the electrode disconnects (via spring). Once the temp drops back down below that temp, it is magnetic again, electrode reconnects, and heats it back up. So you hear the iron click every 10 seconds or so briefly once it’s up to temp. The awesome thing is it’s extremely accurate, and never needs adjusting. Obviously the downside is, adjusting the temp of the iron requires letting it cool down between changing tips. But again, I rarely use anything but 700F, so I don’t care.

Because of all this, as well, there’s VERY little to break down, and the tips, since they’re designed for a specific temp, are quite inexpensive (about $5-7 each).

It’s a soldering iron, so I can’t go on a whole lot about it, but it is by far the easiest, and most reliable one I’ve ever used. I’m sure better ones exist, but for the price point, and for what it does, I’m not sure it could be ANY better. There are reviews out there of people that have had theirs for 30 years, with no problems. Can’t go wrong with that. Highly recommended. Pick one up on Amazon (least expensive), Digi-Key, or Mouser.