You are here: Home / Archives for Horology 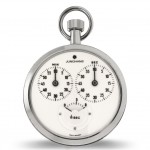 Several months ago, I read a review by Ken Rockwell on the Junghans 1/10th second mechanical stopwatch here, and ever since then I’ve been intrigued. Ebay has a pretty consistent supply of them that go for anywhere from $25-150 (sometimes over $300). A couple months ago I lost an auction for one that was non-functional, but the last week, I won one for a mere $50 that the only thing wrong was the lens (plastic crystal) had come out. Well that’s easy enough.

After receiving it, it appeared to be in pretty good shape, though the lens couldn’t be self re-inserted. Luckily for me, and the reason I tried bidding on a broken one, and this one, is my wife works for a jewelry store that has a full time horologist on staff. So, she took it to work, and he was able to remove the back, then the movement, and reinsert the lens (needs to be put in that way, but also needs the flexibility, which is why it’s plastic), and said everything looked good (didn’t service it, since it seemed good)1. As a bonus, he put it into his fancy watch accuracy tester (not sure the technical name for this), and found it was only 8 seconds fast per day! That’s nearly Rolex accuracy (-4/+6 seconds per day) which is awesome for a 40-50 year old watch!

All and all, I’m extremely happy with the purchase. For those looking, the watch has 7 jewels (some sites indicate it’s 17, which is incorrect, that’s the 1/100th second watch). And if you’re really geeky, here is a mp3 of the watch ticking2. For additional info, check out Ken Rockwell’s review linked above. =)