You are here: Home / Archives for HDMI 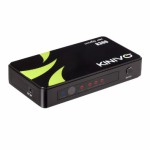 After getting a PS4, I realized that I was one HDMI port short on my TV. So, I started looking for a simple HDMI switch since the option of a stereo receiver wasn’t really a good option for the space. Everything I found seemed to indicate two things, Kinivo seemed to make the most reliable units (and have the best support) and that the PS3 was really finicky with HDMI switchers. I bought the 3-port 4K switcher since I figured I might want to use it in the future should I have a 4K TV.

Amazon got it to me in a couple days, and I hooked it up. PS4 worked great… and… ThE PS3 didn’t work at all. I occasionally got the unit to work when the PS3 was in 480P mode, but it would just cut out again after a reboot. I contacted Kinivo support, and within a day, they got back to me, and after confirming I’d done the basics, they sent me a new unit (through Amazon) and I had that new unit in 2 days… which worked perfectly. They also provided a return label so they could take a look at the defective unit (they also said they’d let me know what they found on disassembly).

Other than the defective unit (which hopefully doesn’t indicate an issue with their QA), I’m quite happy.