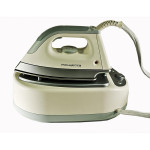 Mother-in-law, ages ago, gave me her broken Rowenta DG580 steam iron to me saying it was broken. The switch was basically doing nothing. So, I sat on the thing for months not wanting to touch an iron (boring). But, finally took a look recently. First up was the o-ring on the fill stopper. I ordered a replacement from Rowenta, but it didn’t fit at all. I also ordered a whole new cap, and it worked, but looked ugly. So I went to a local o-ring shop, and managed to find a replacement o-ring that fit pretty well. It’s a -208 silicone o-ring. It’s not a perfect fit, and a -312 might fit better, but they didn’t have any. The only difference being the thickness of the o-ring.

Now, the trigger. Opening the iron required a security torx bit, then pulling off the top of the handle. The trigger, at this point, was obviously broken at the narrow point. My first attempt to fix this was simply some two part epoxy made specifically for plastics. This held for about 2 shirts worth of ironing before re-breaking. My second fix was what I should have done in the first place. I took a soldering iron on “low” (about 600F), and melted a line down the length of the narrow part of the trigger, then “mixed” the resulting plastic together then back down in the channel than had been created. Effectively “welding” the plastic back together. I then went around the periphery of the narrow part, to further weld it back to the main trigger. While not pretty at all, it does hold, and I was unable to break it with a moderate amount of force, and also pulling the trigger as hard as possible. If this fix does not work, my next step is to make a mold of the trigger with silicone rubber, then make a resin cast replacement of the trigger (I’ve also thought about 3D printing a replacement, or worse, having a metal trigger machined). Sadly Rowenta stopped making replacements some time ago.

Not sure if this will help anyone with this issue, but hopefully someone will find it useful. =)