You are here: Home / Archives for Cucina 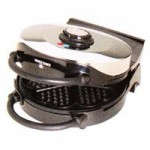 A few weeks ago I went to make waffles with my trusty Cuisinart and found that after 4 years of use, the non-stick coating had finally given way to something “not non-stick”, resulting in impossible to remove waffles. So, I threw it away, and went on the search for a replacement. Everyone raved about the Villaware waffle maker, but they seemed to have stopped making them. After some more looking, I found that the Cucina Pro is actually the same machine, just new name. After sitting on it for a few days, wondering if I should order one, I hit up one of the nicer kitchen supply stores in the area, Cooks, Pots and Tabletops, and found they had the Cucina Pro 1476 for an Amazon level price. Purchased, I went home, and immediately made some waffles.

First off, it’s heavy. My Cuisinart maybe weighed 2lbs. I think the CucinaPro weighs in at 4lbs. So it takes a while to warm up (and conversely, cool down). First use, it gave off a bit of smoke as the protective coatings cooked off, and had a bit of a smell, but it went away after use. The Waffle Tone is a bit odd too, but nice. You can go do something in another room, and hear when the waffle is done. With the batter I use, I have it set to 5 (out of 6) on the doneness scale, and it produces a crispy waffle. Doneness is quite good, and the waffle overall was probably one of the best I’d had. The only odd thing being the “look” of the doneness. You could see a line where part of the waffle was lighter than another. This either has to do with how I poured the batter, or the lack of an expanding hinge in the back. Either way, this is cosmetic, and didn’t affect taste.

All and all, it’s a great waffle iron. And for only $20 more than the Cuisinart, it makes a much crispier, tastier, product.