You are here: Home / Archives for carpentry

So, last weekend at the beach, I found a picture of what someone else was doing for keeping Carnivorous plants (link here about half way down the page, on the right side).

Based on that picture, Tara drew up a basic diagram. It required 4 2×4’s (8′), and 5 1×4’s (8′). The picture indicates one large table. I modified the idea to split it into two areas. One that will hold Bonsai, and other “normal” outdoor potted plants, and the other that will hold carnivorous plants.

So, two full 2x4s, then 2 of the 2″x4″x18″ pieces create the narrow sides (interior attached, so the actual dimension is 8’x25″). Then install two more of the 2″4″18″ pieces in the center to surround the middle legs. Legs are also 2″x4″x18″, attached parallel to the the short sides, on the interior of the “box”. The two short pieces of 2″x4″ go between the outer legs to make it a rectangle area rather than a wonkey “plus”. Then just attach the slats. I think ours are about 1.25″ apart.

Last part will be to line one side with plastic (probably put some type of fabric under the plastic to help prevent any punctures), and staple the plastic to the top of the frame. Then run 1″x2″ around the perimeter to cover the plastic and make a nicer edge.

Our only regret at this point is not using nicer wood. If we were to do it again (which we probably will in the next few years when this one wears out, or we need more space), we’d use Cedar.

I’ll post another couple pictures when I’ve got the plastic on, and then when I’ve got it “populated”. Maybe also post a design drawing. 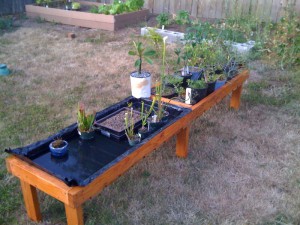 UPDATE
Here’s the “bench” with the plastic installed on one side, and plants in place. Obviously I have some room for more Carnivorous plants. My Bonsai side, however, is a bit crowded. It’ll be better once I transplant a few of them into proper pots instead of gallon nursery pots.

Only issue is there’s a small hole in the plastic, so there is a slow drip on that side. This isn’t a huge deal since carnivorous plants, by and large, don’t like to be waterlogged so much as wet. So the water level slowly dropping via evaporation and the leak are okay. I still plan to replace the plastic with non-leaking plastic (probably pond liner), but it’ll work for now.

The final task is going to be running the 1″x2″ stained and sealed “trim” around the top edge. This’ll make the whole thing look nicer, and hide the plastic on the carnivorous plant side. The whole thing does make watering a heck of a lot easier. And once the plastic no longer leaks, I figure even in the hot summer, I’ll only have to refill the carnivorous plant side once every couple days.

Only issue will be, in the winter. how I try to keep the water level down to prevent root rot. I can either elevate the plants, or I could install some type of drain. I’m liking the drain, but I’m not sure how it’ll work. Guess I post a new item when I figure that one out. For now, this post is done. =)