In this, I’m going to be comparing the results from 5 different machines. They are:

All stats were created with bonnie++ 1.03d (1.03e will not build on 10.6.5 due to lack of support for O_DIRECT). All tests will include the bonnie++ parameters, as well as the results. The purpose of these tests is largely to see how various setups compare, and was largely prompted because of Splunk performance on various drive configurations. Splunk is largely reliant on Disk IO (IOPS mainly). Sadly I have no ability to test SSD performance. Perhaps at some point in the future. Please note, the graph below, is in logarithmic scale, so check out the labels for each bar, rather than looking at relative size (unless you think logarithmically). 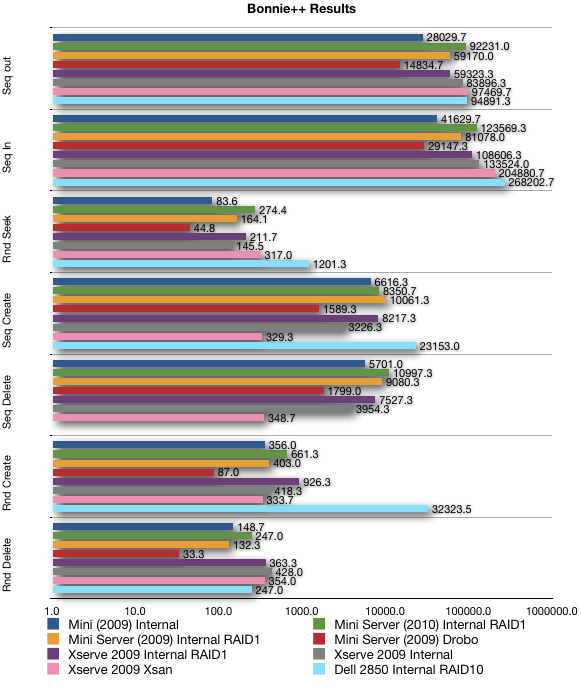 What this really says, other than the Dell kicked everything else’s ass (as you’d expect with a RAID10 setup of 15k RPM drives (which is also why there is no result for Seq Delete on the 2850, because it was just too fast)), and that the Drobo is pretty slow in comparison, is that going from 5400 RPM drives in the Mac Mini Server 2009, to 7200 RPM drives in the Mac Mini Server 2010 results in a 67% improvement in performance (specifically IOPs (I/O Per Second), represented by the “random seek” value), which seems rather high for the change between 5400rpm and 7200rpm (the change should only be about 33% (given the 33% faster rotation speed of 7200rpm vs. 5400rpm). But, given it’s 2 drives, maybe that accounts for the doubling in performance? I’m not sure I can say one way or the other. And going from the previous Splunk machine (the early 2009 Mac Mini with a single 5400rpm drive, to the new 2010 Mac Mini Server with two 7200rpm drives gave me a IOP increase of 228%!! Which explains why I see results MUCH faster now than I used to.

Of other interest, albeit tangentially, is that the performance on my Drobo, and my Mac Mini Server at home, are both lower than when I originally purchased them. Which, isn’t terribly unusual since the free space on both is probably heavily fragmented, which would impact the results of bonnie++. Also, I’m not sure how the Drobo performance changes as more drives are added (I started off with 2 drives in it, between the original results and now, I’ve added another drive).

Here are the actual results in table form:

Performance is fun. Splunk is kickass, and running it on hardware that actually can handle the I/O for a small shop like us (about 150-250MB/day of indexed data) makes it much more appealing to use. Now if only they’d bring back 64-bit support for 10.6, I’d be a happy camper (64-bit support gives better performance largely because the “buckets” of data can be stored in fewer files due, I think, to the ability for indexes to be larger, and files to be larger. Bigger singular indexes give better search performance than it being broken up into several smaller ones).