I play some online multiplayer computer games with a friend (Portal 2, Starcraft, Diablo, etc) while talking over the phone with him. It’s generally easier than Skype/Teamspeak/etc since the cell call is free (same carrier), and doesn’t slow down either machine. After a year or so of playing while wearing my iPhone earbuds/headset, then over-the-ear headphones over the top of them, I realized what I needed was a dual input headset (like this), and that I could probably make something like this with some clever adapter use.

After buying what I thought would work (a 4 pin splitter, a combiner, and a mic), and finding out it did not, I decided to MAKE what it would take.

My first design, which I guess I would consider “version 1” is shown below (note: it seems this is improper, and should have some resistance inserted (see link below)). The parts were pretty simple. I salvaged the two cables needed, but if you wanted to buy all the parts, here’s a list:

The stuff you need on top of that (unless you don’t plan on soldering/insulating), are:

Helpful info on the web:

The soldering is pretty simple. The biggest issue I had was to get the iPhone cable tinned (the wires are all coated in colored plastic material). The interesting bit is that one would think to wire the MIC input to the tip and sleeve, but in fact, the iPhone didn’t seem to like that, and it required wiring into the ring and sleeve.

Here’s a basic wiring diagram (sorry, it’s not perfect since I’m not sure there’s any good symbols for these connections). 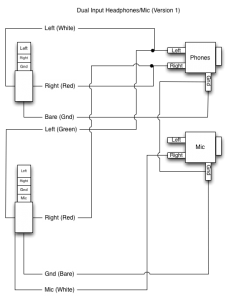 My big questions are: do I need any kind of diodes to keep the signal from one device being sent back into the other? Am I going to damage my headphones by basically doubling the power of the signal going to them when both devices are going (I’d guess no, since the headphones should be able to handle a lot more than a laptop and iPhone outputting to them)? These are both sort of the same issue. After real world testing last night, I found that indeed, a friend is hearing himself echo back.

I hope to have Version 2 include a balance adjustment so I can easily control the level of phone/computer input (rather than having to constantly adjust both devices individually). This is already being toyed with. I also hope to have it streamlined a bit as far as inputs/outputs, quality of cables, etc.

UPDATE 1 (6/8/2012): Here is version 2 of the design. It does proper channel combination according to this. I’m in the process of building it, but early breadboarding seems to make me think it’ll work great, and doesn’t make everything really loud.

I still hope to have Version 3 include a balance adjustment between sources, but I have yet to breadboard this, and am not sure it will work. My initial thoughts are it would look something like the schematic here, where the two shown potentiometers are actually a single stereo pot.

UPDATE 2 (3/20/2013): Finally got around to actually building version 2. Still have an issue with echo on the other end of the phone conversation. Think I need to add some small capacitors into the circuit, but not sure where. Waiting for some info from another site, and will post updated schematics if I can get it to work. Also need some more 470Ω and 10KΩ resistors. Will update again in the next couple weeks, hopefully. Link of interest: http://awaitinginspiration.com/2009/08/iphone-call-recorder/

Update 3: With some help online, I think I finally found something that works. Will post more in the future, but for now, here’s the discussion thread.