Ungrounded CATV coax connections can cause some rather bad speaker hum (at 60hz here in the US), and horizontal lines in your picture. Grounding your coax connection can help alleviate these problems, though it may not fully solve your issues. To demonstrate, here’s some backstory.

We have a older CRT TV in the garage that we use to play DDR/Stepmania, as well as have a TV going when working in the garage. I recently hooked an old computer up to the TV for a permanent Stepmania machine. Right after hooking this computer up, I started getting a really bad ground hum on the TV, which could be quickly fixed by installing a ground lift (Cheater Plug) on the computer power connection, but this is generally a bad idea (computers like being grounded). After doing some research, I found out that an ungrounded CATV connection can cause ground hum. Checking it out, I removed the CATV connection from the TV, and viola, the hum was gone. Okay… so, now to actually FIX the problem. 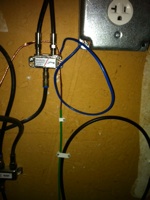 My house was built in 1978, and I’d guess cable was installed in the 80’s (though it was upgraded since then since the cable coming into the house is RG6). But, it’s not grounded (there’s no grounding block outside/inside). I have two splitters inside (a 2 way, and a 3 way), neither of which was grounded. But, using some spare wire I had, I was able to quickly and almost completely eliminate the ground hum by placing a wire between the splitter used for that TV, and a surface mount electrical box nearby (the blue wire in the picture to the left). There was still a bit of hum, and scrolling bars, but only really audible at full volume on the TV.

The next day, I installed a real ground out to the house grounding rod outside (as seen by the green ground line in the picture). Alas, this didn’t have nearly the same result as the blue jumper wire. After inquiring with an electrician, I found that it’s okay to leave both in place, so that’s how it is today. The real fix, from what I’ve been reading in addition to grounding the coax in the home, is to install a cable isolator. I purchased one of these (from Cencom) and hope it will truly solve the issue. We’ll see if I can install it on the whole house input, or just on the non-DOCSIS side of the splitter. I’ll update this post once I have it installed to answer whether it worked or not.

Two pages that I found useful in my grounding research: