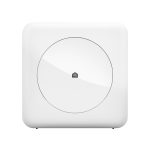 Well, I finally did it. After years of soldering with an old Weller WTCPT, and an equally old Hakko 936, I decided to upgrade to a modern FX-951 (kit), and the Micro-soldering hand-piece (FM-2032). I’ve been doing more and more SMD work lately, on multilayer boards, and there just wasn’t the thermal capacity in my previous irons. And while the JBC stations looked appealing, they didn’t look $450 appealing. Also, the thought of finding parts, tips, etc wasn’t overly appealing. Where I know Amazon and even Fry’s stock tips for the Hakko.

I ordered the unit from tequipment.net, my usual source for this kind of thing. They offer the best education discounts, as well as one for eevblog members, and often will discount even more if you’re buying a lot of equipment. Sadly, I didn’t buy my FR-810 at the same time. I did buy the FX-951 Kit, the curved tip (T15-J02), and the Micro-Pencil curved tip for it (T30-J). Oddly, the T30-J shipped separately, but meh.

Once I had the unit, I also had purchased the T15-D08 tip at Fry’s earlier, and was able to immediately switch it it (the unit came with a conical tip, which are generally useless). The unit fit perfectly on my bench, and the feel of the iron is great. Some basic soldering tests showed it had a HUGE amount of thermal capacity. I was able to solder easily to ground planes, and thermal “pads”. Heck, I was even able to do some chassis soldering that previously required my giant Weller D650 soldering gun.

The best part of the unit, though, is swapping tips. I bought a couple extra “sleeves” when I ordered the unit so I could swap tips, and indeed, swapping them is crazy easy. Just unclip, drop into holder, and clip a tip in. The worst part, though, is the incessant “beep” when the tip is unplugged, but thankfully, you can disable that via the info in this document.

I love the iron. Much like switching to Ubiquiti for wireless, and never wanting to go back to consumer wireless, I am not sure I’ll ever go back to a consumer soldering iron. =) 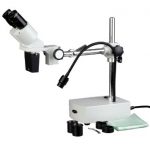 After moving my workbench, I’ve been buying tools that I couldn’t otherwise have used in my old space. One of the last things I needed was a stereo-microscrope for doing SMD work. Some looking around quickly pointed me to the Amscope SE400-Z, which gets great reviews, is affordable ($185 on Amazon as of today). I had a bunch of Amazon credit, and rewards, to I used those and the total was only $115. Two days later, Ontrac delivered the scope in a pretty small, but weighty, box. The unit goes together quite easily (especially if you’ve seen pictures, or any reviews online). The manual, for whatever reason is password protected from download, but the access code was on the side of the box rather than in the included pamphlet. The manual, however, is pretty useless.

The scope as a whole is quite nice. I’m haven’t used for much SMD re-work at this point, but it seems like it should work very well for everything I might do. While a continuously zoomable scope, on a boom or arm would be nice, but I don’t really have a good space for one and didn’t want to spend the $500+ for one. =/ Same goes for a trinocular (camera) port.

The base of the scope is pretty stout, but could be a bit heavier. It’s ferrous, so you can slap a magnetic parts tray to it, and put screws, etc in that. The gooseneck light is great, and allows for moving the light to just the right angle to see SMD markings (which are often laser-etched, and aren’t legible in direct light). I do use the microscope without my glasses on, and it looks very clear. The working distance is great, but I will need to figure out a good working surface for some boards since they don’t always lay on the bench “flat”, or study enough to allow soldering. Which is my only complaint. Although the working distance on the unit is very good, I do wonder about any kind of clamping I’ll have to do on double-sided boards. I may need to invest in some low profile clamping (either something cheap like this, or a couple Hakko Omnivise‘s).

The scope does sit on my bench well enough that I can use it seated from my stool. My bench height is 33 inches, and I’m medium height, so it should work for most people. Rough focusing for your working height is done by moving the horizontal arm height up and down, then fine focusing is done via the knobs. The optics are very good for a scope this price, and really made me realize the finish difference between the cheap eBay/Amazon tweezers, and the good WIHA ones I have. Yeah, I’m probably going to need more tweezers at some point. =/

All and all, I’d highly recommend at this time. It’ll be interesting to see how well it survives. It feels very sturdy, but I do have a toddler, so it will have to get that test. =)

UPDATE 1 (6/1/2016): I have since soldered a QFP64 package using the Amscope, and holy cow, it’s awesome. Previously, doing this by eye (and I have pretty good close up vision), it was a pain. I was basically drag soldering, then cleaning up the bridged pins, and then running a blade between the pins to make sure things were clear. With the scope, and actually being able to see the pins, it was MUCH simplier. What used to take 5-10 minutes of fidgeting, took maybe 2 minutes, at most? I’ll certainly never go back to unaided soldering of small SMD components again. =)