Couple weeks back I got a request to repair a friends computer. It would lock up, not reboot, etc. The computer was largely for gaming, so after an initial software scan, I figured it must be heat. Opening the machine, I noticed none of the case fans are running. I had initially done the build on the machine, and new all the case fans were wired to the fan power “bus” provided by the power supply (which handled speeding/slowing the fans based on case temp), an Antec TruePower Trio TP3-550. Asking the friend, he mentioned that he had noticed the LEDs on the front case fan had went out a month or two ago. Hmm. Checking the voltage on that fan bus showed only 2V (not nearly enough to run a 12V 120mm fan). The PSU’s fan was also not running. Crap, that was probably overheating the PSU, and causing the instability.

Wanting to get his machine back up and running, I picked up a replacement Corsair power supply, installed it, and got him on his way. Then, I went to repairing the Antec power supply. Warning, because this is a power supply, and especially because this is a high wattage switcher, there are dangerous (and lethal if you live in parts of the world that run off 220/240 household) voltages inside. Make sure the unit is unplugged, off, and even give it an hour or two for the primary caps to discharge. I have seen the primary discharge relatively quickly, so there must be a bleeder resistor in the unit, but I didn’t bother tracking it down. 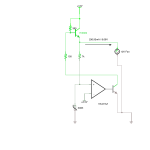 Opening the unit, two things immediately jumped out at me. One, that the PSU fan and the fan power bus share the same power source (meaning, if one dies, they all die), and two, there was a transistor in the general area of the power for the PSU fan that looked suspicious (it’s right there, it’s obviously what controls the fan speed, etc). I didn’t think it was bad, necessarily, it just stood out. It’s marked as Q901, and the transistor is an HI3669. The only other culprit would be a 3 lead package marked as a KA431AZ (a Programmable Shunt Regulator (basically, an Op-amp and BJT with an integrated 2.5V reference)). After some beeping out (tracing where things went), I came up with the circuit diagramed on the left. At 300 Kelvin (about 80F), there should be about 8.7V on the fan bus. At 333K (140F) there would be nearly 11V on the fan (right circuit). 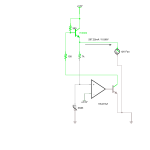 That’s with the HI3669 having a hFE of 300 (the minimum stated in the datasheet. If, however, I reduced that hFE to say, 10, things fell off dramatically, and showed similar to what I was seeing in circuit. I grabbed my Hakko FR-300 and removed the suspect transistor. After doing so I did notice some discoloration on the metal backing. Popping it in my cheap-o multimeter with a NPN tester, it showed an hFE of 2! Well, there’s your problem!

So the trick now was finding a replacement. I did have some C5707‘s that I bought a while back to fix a Dell monitor, those should work (similar specs, though ideally the replacement would be a TO-220 just from a power dissipation standpoint). Putting it in real quick, and powering it on, it worked! Awesome.

As for why this transistor went out? I’m guessing because I didn’t read the manual and see the point that says to not plug in more than 2 fans to the fan bus connections. That caused excessive heating, and mixed with dust in the case, caused more heating, and bam. Lowered hFE (even though testing the transistor via the diode test on a multimeter showed it as “working”). So, the moral of the story is “read the manual”? No thanks. =)