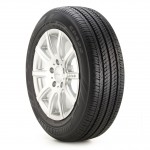 Since purchasing my Prius in December of 2006, I’ve had 3 sets of tires. The stock Bridgestone Turanza EL400’s, the Bridgestone Potenza G019 Grid’s, and now the Bridgestone Ecopia EP422’s. Yes, it seems I have a thing for Bridgestone, but really, it’s just because there’s a Bridgestone/Firestone here in town that originally did an online pricematch for the Potenza’s, and then when they failed early (cupping), they gave me a large discount on the Ecopia’s.

Without further ado, here’s the data.

A couple things jump out here, at least to me.

The first item is kind of shocking, and I guess corroborated by a Wall St. Journal article just published. Interestingly, I also followed the trend, and my consumption of fuel went down (the national average was 3.6%, where my average was over 10%. In the sample here, cost per tank for the Turanza’s was 23.45 on average, for the Potenza’s, $21.46, and for the Ecopia’s, $29.66! Even with the increased mileage, that means the cost per mile for the three sets of tires, averaged over 10k miles, was $0.07/mile, $0.06/mile, and $0.08/mile respectively. That’s a pretty significant price increase over previous years.

So there we have it. Low Rolling Resistance tires are not a joke, and Toyota obviously put some effort into finding a good option when they first released the Prius and LRR tires weren’t available. I just wish LRR tires in my tire size when I went to replace the stock ones, and I didn’t suffer for a couple years with the Potenza’s.