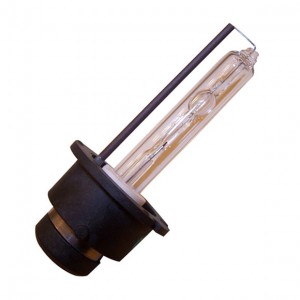 Tools you’ll need: Phillips Screwdriver, 10mm socket, matching ratchet, small flathead screwdriver. And if you get the same bulbs as I did, a relatively coarse file for filing the slot on the bulb collar. The wikiHow article recommends WD40, but I wouldn’t recommend that as none of the bolts were “stuck”). If you have it, I’d HIGHLY recommend some type of electric screwdriver capable of taking the 10mm socket. It’ll make things a LOT faster.

You’ll also need some kind of car ramps, and something to block the back wheels with to make things a bit safer. 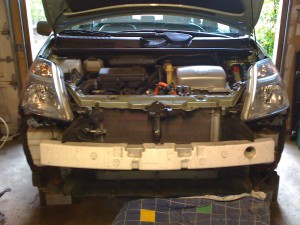 Following this good how to on wikiHow (and related YouTube videos, which take a while to watch, but are good to watch before hand), I did the work in about 1.5 hours of productive work, with only one (or two, depending on how you look at it) caveat. The “square” alignment notch on the replacement bulbs was too narrow to install in the bulb housing. So, I had to take the file on my Leatherman and widen the notch by probably 1/32″ to get it to fit. Once I did that, it installed great.

While I’m sure if I’d paid attention, and didn’t just go for the easiest fit, I would have realized that I’d installed them sideways at first, it would have been quicker, but as a note to anyone else that tries. Make sure the “filament” (the “wire” that runs up the outside of the bulb, see above picture) is installed on the bottom side of the bulb (when the casing is upright). If it’s installed to one side or the other, it’s not right, and may interfere with the “high beam” functionality (on the Prius, a “shield” shifts when you engage the high beams, rather than on some cars where another filament lights). 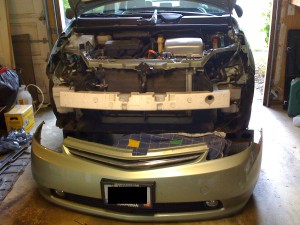 I’d imagine if I did this again in the next couple weeks, I could do the whole process in 45-60 minutes. It’s not difficult, and the hardest part, as I’ve seen others echo elsewhere, is getting the bumper aligned and back on. One thing you will notice is how much dirt accumulates in the area of the car that’s exposed as you do this install (especially what will fall out when you remove the plastic skid plate from the bottom). So, I’d recommend taking this opportunity to use a ShopVac to remove all the random debris. You’ll rarely get this chance, unless you fancy the idea of removing the bumper to clean your car. =)

I found that having my Bosch Pocket Driver (PS20-2), with a 10mm socket, was extremely useful for this job. The only screws it was unable to remove, and I had to use a ratchet on, were the two “side” (those on the sides of the car, above the wheel wells) bolts for the headlights. I also didn’t use it for the clips (obviously), but otherwise, it worked great. If you do use a electric screwdriver of any type, remember to turn down the torque when you reinstall the screws that run into plastic (any of the screws that are very coarse threaded).

Another note: You CANNOT test the new bulb unless the other headlight is also installed! When I got everything apart, I removed both headlights. I then tried to test one without the other installed. I found that turning on the headlights would cause the new one to light for about 1 second, then it would go out. Once I hooked up the other headlight, it stayed lit. Seems like it’s some resistance thing *shrugs*. So, test one, then do the other. Also, make sure to test normal headlight function, then high beams, turn signals, running lights, etc. I had some initial issues with the high beams as the bulbs were installed “sideways” and were interfering with the high beam functionality (as I discussed earlier). So, TEST! You don’t want to put everything back together only to realize something doesn’t work, and have to take it back apart.

Also, I’d recommend being extra diligent (have a helper) when you reinstall the bumper. I initially tried to put it on and had one of the “clips” bent so that it preventing install. This was a quick fix, but if I’d tried too hard to get it on, it might have broken that clip.

All and all, I think the new bulbs are “whiter” than the old ones (probably because they’re new?), and it was certainly worth doing it myself rather than paying the dealer. While it would be cool to have small enough hands/arms to do the “lazy” method, it really wasn’t that big of an issue to do it the “hard” way if you’re at all mechanically inclined (I mean, if you can handle putting together Ikea furniture, you’re capable of doing this, if you have, or have access to, the tools). Just take your time, and follow the instructions. Or, get a friend over that knows something about cars, and pay them in beer (after! Intoxication doesn’t really go well with auto maintenance).

Have fun, and feel accomplished! You just saved yourself a bunch of money, and a possible ticket for a “burned out” headlight!