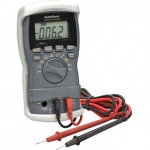 While at the coast a few months ago, I stopped by a Radio Shack and picked up a 22-812 Multimeter for the incredible price of $50 (the RS website doesn’t even list the unit anymore, and the local RS’s have it for $69-79 depending on the display). The unit appears to be out of production (may not be the case), which is a shame since finding a Multimeter with these features, plus a computer interface is nearly impossible for under $150 anywhere else. I’ve had the meter for a few months now, and it seems fairly solid, with a few complaints.