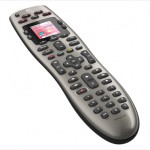 I’ve known about the Logitech Harmony remotes for years, but always held off getting one due to price, and overall concern about functionality. But two weeks ago, I saw Costco had the Harmony 650 on sale for $56, and figured I might as well give it a try. And to cut to the chase, I can’t believe I waited so long.

A decent universal remote often costs $40-50, and programming it consists of either looking through the manual and finding the codes for each device you have, or worse, training the universal remote certain commands by pointing your OEM remote at it, and having the universal “learn”. Extremely tedious. And while the Logitech setup process is a bit awkward, it’s lightyears ahead of other options. For the 650, you install some software, and then plugin the remote via USB, and go through a website wizard to program the remote. This consists of setting up each device you have by make and model. The 650 limits you to 5 devices, which is fine since I only have 3 for this setup (TV, Cable Box, and Apple TV). After this is done, you set up tasks, like “Watch TV”. The wizard asks things like “which device changes channels” and “which device controls volume”, etc. Basically, you’re setting up Macros. When you’re all done it uploads that info to the remote (as well as updates the firmware if there’s an update), and you’re ready.

On the remote, you say “Watch TV” and it then turns on the TV, and cable box, and you get volume on the TV, channels on the box, and it all just works. The only thing I had to do was manually assign the day forward/back buttons for going through the Guide on the Cable Box, since they previously were hard to get to soft buttons on the screen. And the only issue other than that is a limitation of IR, in that the remote has no clue if the TV/Cable Box, is on or off. So if you forget, and turn your TV off manually, you can get in this state where the remote thinks everything’s cool, but the TV is off, and the cable box is on. This is easily fixed through the remote’s screen, and toggling the power on whichever device is the “off” one.

For less than $60, to get a remote that just works, and I don’t have to switch between things, it’s great! If I ever upgrade, I’ll go to an RF based one, but for now, IR works fine by me.