You are here: Home / Electronics / FNET 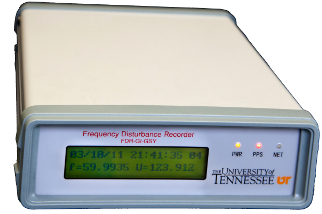 Being a data nut, a relatively recent electronics enthusiast, and now a burgeoning “time nut”, there was a thread on the timenuts email list on monitoring the mains frequency (60Hz in North America, and 50Hz most other places), and how accurate it actually is. One of the responses pointed toward FNET, or a project run by the University of Tennessee. They provide a “box” that you plug into your network, mains (120V in my case), and a GPS antenna. It measures your mains frequency with what I assume is a zero cross detector, correlates that frequency with a highly accurate 1PPS signal that it’s GPS receiver generates, and then streams that data to the FNET servers (which can be viewed here).

Thinking that sounded pretty awesome, I contacted them, and asked if they wanted a box in Eugene (my intent being to install it on Campus in my office). They jumped at the chance, and sent me a box. A week or two later, I got it, and tried to set it up. Sadly, after a couple days of futzing, I realized to my dismay that Low-E windows block GPS signals. =( BUT! I have access to the “penthouse” where they have all our HVAC equipment, and has roof access. After some investigation, and some help of a friend, I was able to run the GPS cable through an empty 1″ conduit, outside, up the side of the penthouse, and onto it’s roof, which is solid steel, so the magnetic GPS puck sticks great. The unit itself I hung from some electrical conduit using some Velcro straps. Also slapping a label on the unit saying to contact me if there are any questions (since a box with flashing lights on it, could be confusing to a random Facilities employee).

GPS lock was great (I average about 10 satellites), and the cable was a perfect length (5 meters). I would suggest they switch to SMA connections for their GPS in the future, but meh. If you’re curious, take a look here. I’m unit #1033. It’s interesting to see how the mains frequency droops, or elevates during the time of day, and knowing whether that’s when people are just getting home, or leaving, etc. I would also highly suggest reading up on the US Power grid, and how the West and East are joined by the Texas interconnect.